Interestingly enough, the roots of a Kaiser-Frazer Owners Club go almost as far back as production of K-F automobiles.  In early 1947, Arnie Sorenson,  Kaiser-Frazer in Two Rivers, Wisconsin decided to start a club for those who bought new cars from him.  The group held monthly meetings and (weather permitting) outings.  Mr. Sorenson’s activities caught the attention of Kaiser-Frazer Sales Corporation’s Regional Office in Chicago IL and a story was written for a 1949 issue of KAISER-FRAZER DEALER NEWS, a publication distributed to Kaiser-Frazer outlets around the world.  By late 1951, there were 1700 chapters of the Kaiser-Frazer Owners Club operating across North America.  There is no evidence that the chapters ever got together and the groups faded away during 1952 and 1953.  However, two men mulled the idea of re-starting a Kaiser-Frazer Owners Club and finally got together to discuss the possibilities.

In 1957, Pennsylvania car collector George Domer began corresponding with Michigan car collector Tom Rankine to propose forming a new car club.  George ran ads in Hemmings Motor News while Tom ran an ad in Motor Trend.  The first meeting of interested parties took place on April 19, 1959 at the Palmer House Hotel in Chicago, and the Kaiser-Frazer Owners Club was formed.  The first 13 members became Charter Members, which included Domer (CM #1) and Rankine (CM #2), and acted as the guiding Board of Directors for the club. In 1973, by vote of the membership at the National Convention that year, the club name was amended to Kaiser Frazer Owners Club International (KFOCI) to reflect the growing number of members living in foreign countries.

“The purposes for which the club are founded are for the development, publication and interchange of technical, historical and other information for and among the members and others who own or are interested in the vehicles built after 1945 by Kaiser-Frazer, Graham-Paige, Willys Motors, Kaiser Motors, Kaiser-Willys, Willys Overland, IKA,  and Kaiser Jeep (including vehicles built by the above companies by their foreign divisions or under license), and to promote social discourse and fellowship among the members; and to maintain references upon and encourage the maintenance and preservation of all such vehicles as well as to promote and publish studies and research pertaining to their history.” (KFOCI Constitution, Article 1, Section 2)

The first club publication was June 1959 to announce the club, event information and member For Sale and Wanted ads; it later expanded to a magazine type publication that fall.  In 1962, the publication was split in two separate editions: the Monthly News Bulletin to advertise club events and member ads, and the Quarterlymagazine for more in-depth articles of interest for and submitted by members.  Of the four magazine issues produced annually, the Summer issue is often a membership roster and the Winter issue is a full color Calendar featuring member vehicles.

Besides the newsletter and magazine, the club periodically releases a Handbook of information on the cars, the company and things related thereto, including reprints of various factory documents, manuals and other items; the current version provides nearly 1400 pages of data and photos.

The KFOCI has members in the USA, Canada and 15 other foreign countries. The club has 3 divisions: Eastern, Midwest and Western with multiple regions designated in each, including various Canadian provinces. Each year an Annual Convention is hosted by one of the divisions; the first was in St. Louis Missouri not long after the Palmer House meeting. The divisions also host multiple regional meets throughout the year; see our list of Upcoming Events for activities in your area. Members may attend any event in any division/region of their choosing. 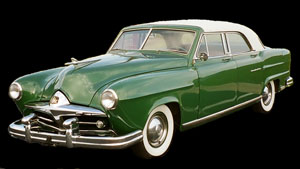